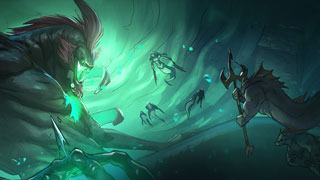 If you pick up this year's DotA2 Battle Pass, you'll be able to check out the game's first co-op campaign.

Each year around this time, Valve rolls out a new Battle Pass for the coming DotA2 International Tournament. In years past, players who purchased the Battle Pass would receive a bevy of in-game content. While this year's offering will include some of that, it will also pack in something new - a co-op campaign for the game.

The new campaign is called Siltbreaker, and its first act - The Sands of Fate - will be available later this month. You join three of your friends in exploring "the blackest depths of Dark Reef." The official site asks, "As Act I opens, a dormant evil stirs in the depths of Dark Reef, with only the secret Conclave of the Brine prepared to face it. Will you answer the Conclave's call and journey to halt this dark power's ascent?"

Playing the campaign lets you battle monster hordes with your friends, and defeating them will earn you campaign experience points. Get enough of those, and you can spin the "Wheel of Rewards," which will give you a chance to win an exclusive Desert Sands Baby Roshan.

The pass also gets some other bonuses, including Team Quests, Battle Point Tributes that let you put bonus tokens on your teammates' wagers, access to DotA trivia while you wait in queue, and many more. You'll also get some content from past years. You can see the full list of rewards here. Buying the level 1 Battle Pass is $10, and you can choose to level up by playing matches or go right to level 75 by spending more cash.

For every dollar that players spend on Battle Pass, 25 cents is added to the prize pool for The Internationa;, which is currently sitting at about $4,457,000 as of the time this was written. This year's installment of The International is schedule for August 7-12 at the KeyArena in Seattle.