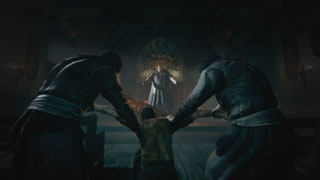 If you thought Outlast 2 was too hard, Red Barrels may agree with you.

Outlast 2 launched on April 25, and since then has been trying to scare the pants off everyone that plays it. It's also reportedly quite difficult. So difficult, in fact, that developer Red Barrels is releasing a new patch to tone it done a bit, at least on Normal difficulty.

In the patch notes, the developer says that the "developers also learned something while going through countless streams, let's plays, and reviews; perhaps they were a little too sadistic." In response, there's a new patch, Red Barrels says that, "Today's patch introduces some minor adjustments to the game's difficulty in key areas and moments. On Normal difficulty this will offer players a more appropriately balanced experience while still maintaining higher levels of challenge on Hard and Nightmare difficulties."

As with any patch, there are also some bug fixes and other things tossed in. You can see the full list of what's included over on the game's Steam Community page.