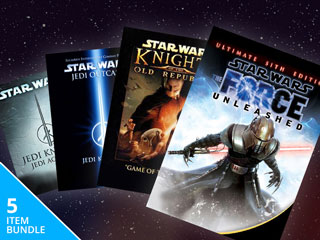 Jump into the Star Wars saga with five amazing games for 75% off. The Steam Powered Star Wars Gamer Bundle is just $14.99 at Escapist Deals.

You'll save 75% on five Steam games when you get them in this bundle:

Star Wars: The Force Unleashed Ultimate Sith Edition: Follow Darth Vader as he leads you through the Star Wars galaxy. This high-action game has you hurling your enemies through walls, traveling to planet Hoth and Jabba the Hutt's palace, and using your Force powers.

Star Wars: Knights of the Old Republic: Choose from nine customizable characters and more than 40 powers in this addictive game rate 9.1/10 on GameSpot and 93/100 by Metacritic.

Star Wars Jedi Knight II: Jedi Outcast: Rated 89/100 by Metacritic and 9/10 by Steam, this game lets you play with a ton of cool new lightsaber abilities as you try out both Jedi training mode and team-based play.IGN calls it "one of the best action games period."

Star Wars Jedi Knight: Jedi Academy: Choose your own missions and adventures as you experience Star Wars from the eyes of a Jedi Apprentice. This game earned 81/100 from Metacritic and a 9/10 from Steam.

Star Wars: Knights of the Old Republic II: The Sith Lords: Will you choose the light side or the dark side? The choice is yours - and the quest for the answer is full of adventure. This game has a 9.3/10 from IGN and a 85/100 from Metacritic.

Get the Steam Powered Star Wars Gamer Bundle for just $14.99 at Escapist Deals.