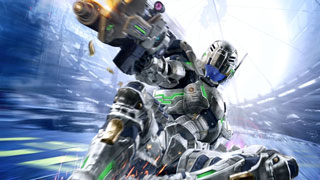 Sega has been teasing a PC port for Vanquish for a while now, and it looks like it's going to be out this month.

If you've been paying attention to Sega of late, you've probably seen them teasing something Vanquish-related. Since we just saw a PC port of Bayonetta, fans are hoping to get to play the third person shooter on their PCs as well. If you're one of them, here's some good news. Not only is the PC port of Vanquish real, it's coming out this month.

The announcement came this morning on the official Sega Twitter account, culminating a couple of days of teaser photos. If you already own the PC Port of Bayonetta, you'll be able to grab the PC version of Vanquish for 25 percent off, but only until launch.

The third-person shooter from Platinum Games was originally released on PS3 and Xbox 360 in 2010, receiving praise for its gameplay and criticism for its short length. In a statement, Sega executive John Clark said that the company has seen a "positive response" to its recent PC ports, and that gamers should keep an eye on Sega for more. "There's more to come from Sega in this space, so stay tuned for further announcements," he said.

The PC port of Vanquish is launching on May 25. You can find it on Steam.