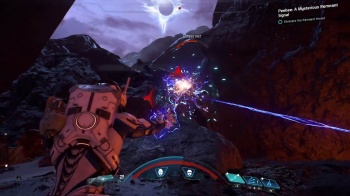 Sources are claiming that BioWare's Montreal studio has been downsized, and work on new Mass Effect titles has been put on ice.

Mass Effect: Andromeda was not as well received by critics and the public as its predecessors, and that reaction is reportedly having some lasting effects at BioWare. Sources close to Kotaku have claimed that not only has the developer's Montreal studio been downsized, but the entire Mass Effect franchise has been put on ice for now.

BioWare Montreal is the studio responsible for Andromeda, and last month a number employees were transferred to the studio EA Motive, also based in Montreal, to work on Star Wars Battlefront 2. Those remaining at BioWare Montreal will help support BioWare's other games including the new intellectual property that was recently delayed.

Our teams at BioWare and across EA put in tremendous effort bringing Mass Effect Andromeda to players around the world. Even as BioWare continues to focus on the Mass Effect Andromeda community and live service, we are constantly looking at how we're prepared for the next experiences we will create.

The teams in EA Worldwide Studios are packed with talent, and more than ever, we are driving collaboration between studios on key projects.

With our BioWare and Motive teams sharing studio space in Montreal, we have BioWare team members joining Motive projects that are underway. We're also ramping up teams on other BioWare projects in development.

There will be much more to come from BioWare in the years ahead.