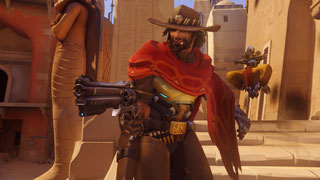 Digging around in the Xbox Store has revealed the next Overwatch loot boxes and more.

It's been almost a year since Overwatch launched, so with the anniversary of Blizzard's team-based shooter looming, it makes sense that the company might be planning something to celebrate. What are they planning? Well, the folks over at True Achievements think they've figured it out. That site is known for scanning and datamining the Xbox Store for new games and information, and they've uncovered new loot boxes and a new edition of the game.

First up is Overwatch Game of the Year Edition. This shouldn't be a huge surprise, as Overwatch was showered with GOTY awards last year. It seems that this will likely replace the existing Origins Edition, as it is listed to contain all the same goodies (Tracer for Heroes of the Storm, baby Winston pet for WoW, the Origin skins, etc.). There is one additional perk, though. The GOTY Edition will pack in 10 bonus loot boxes. Its release date is currently listed for May 23 - the day before Overwatch turns one.

Also dug up in this datamining pass were Overwatch Anniversary Loot Boxes. These loot boxes reportedly contain 100 new items to collect, with the Anniversary event ending on June 5. If previous events are any guide, the event will likely run three weeks, putting its launch around next Tuesday, May 16.

We'll likely hear more about this event in the very near future, especially if this information turns out to be accurate.