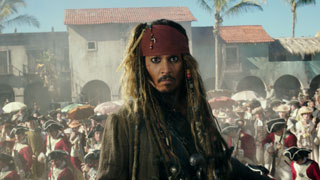 The newest Pirates of the Caribbean film has reportedly been stolen and is being held for ransom.

Hackers have apparently grabbed a full copy of Pirates Of The Caribbean: Dead Men Tell No Tales, and they are threatening to release it on the internet unless Disney pays out a sizable ransom. According to Deadline, the hackers have demanded, "an enormous amount of money be paid to Bitcoin."

Disney CEO Bob Iger revealed the incident to ABC employees in a meeting in New York yesterday, although he did not name the movie. The company has offered no official comment, but Deadline says that insiders told it that the company refused to pay, and Disney is working with the FBI.

Hector Monsegur, Director of Security Assessments for Rhino Security Labs, said of the demands, "All these companies like Disney, Netflix and Discovery may have very good security teams but you have all these vendors and small production companies which don't have great security and probably don't have the budget to focus on their own security so hackers get in pretty easily. Remember back in the day when movies would leak online and they would go to a pirate bay? Now there has been a shift with the advent of ransomware so (these companies) are getting demands to pay for their own IP. Any studio is going to have a problem moving forward protecting their IPs."

Pirates Of The Caribbean: Dead Men Tell No Tales is scheduled to hit theaters on May 26.