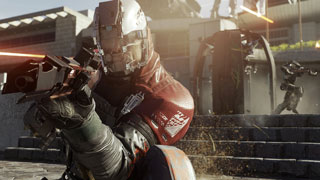 You can play Call of Duty: Infinite Warfare for free this weekend on Steam, and most of the CoD games are on sale.

The Call of Duty series may be heading back to World War II later this year, but for now its most recent installment is Call of Duty: Infinite Warfare. The futuristic shooter launch last November, and this weekend, you can play it on Steam for free.

The free weekend is already underway, and will last until 4 PM ET Sunday. All you need to do to participate is head over to the game's Steam page and download it. If you like what you see, you can pick up the game for half off this weekend, bringing the price down to $29.99. If you want to get Modern Warfare Remastered as well, you'll have to go up to the Digital Legacy Edition, which is currently 33 percent off at $53.59. There's still a rumor going around that Modern Warfare Remastered may go standalone this summer.

Along with Infinite Warfare, most other CoD games are on sale this weekend as well. Black Ops 3, Black Ops 2, World at War, Advanced Warfare, and Ghosts are all half off, just to name a few. You can find all the deal on the Steam page for the sale.