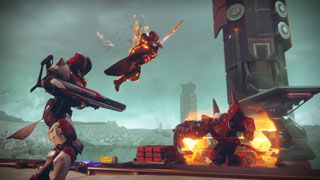 You won't need to gather up a bunch of Grimoire Cards to access all the lore in Destiny 2.

If you played Destiny, then you probably have a special place in you heart for the game's Grimoire Cards. It might not be the best of places, but it's definitely there. If you didn't play, then you should know that finding a Grimoire Card would unlock a piece of lore for you to check out, but it wasn't in game - it was over on the Destiny website. Some players weren't too fond of that, but here's some good news: That's changing for Destiny 2.

This seems like a much better way to approach the plot and the lore of the world. Rather than send players haring off to a website outside the game, Destiny 2 can deliver all of its story in-game and in-world.

There are certain to be some folks who lament the removal of Grimoire Cards, as gathering them all presented a challenge for completionists out there, but in my personal opinion, it will help make the game better. Destiny 2 is launching on PS4 and Xbox One on September 8, and on PC at a later date yet to be announced.