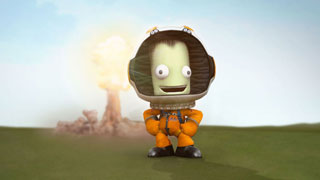 Take-Two Interactive announced today that it has acquired Kerbal Space Program, and that Squad continues to work on the space simulator.

There was a rumor going around last week that the team behind Kerbal Space Program had been hired by Valve. That turned out to be somewhat inaccurate, as Valve had instead hired a number of developers that had worked on the game. Now, Kerbal Space Program is back in the news - this time because the game has been acquired by Take-Two.

The announcement came in a press release from Take-Two, which mentions that the, "team at Squad will continue to provide support and ongoing development for the title through game updates and expansions, including the previously announced Kerbal Space Program: Making History Expansion, which is expected to launch later this calendar year." Take-Two did confirm to The Escapist that although Squad is still working on KSP, the developer was not acquired and remains independent.

Take-Two SVP and Head of Corporate Development and Independent Publishing Michael Worosz said of the acquisition, "We have been impressed with Kerbal Space Program since its launch, and we are committed to grow this unique experience while continuing to support its passionate community. We view Kerbal Space Program as a new, long-term franchise that adds a well-respected and beloved IP to Take-Two's portfolio as we continue to explore opportunities across the independent development landscape."

What does this mean for the future of Kerbal Space Program? It's too early to say. For now, it sounds like Squad will continue development on the expansion as before. But what plans Take-Two may have for the game are anybody's guess.