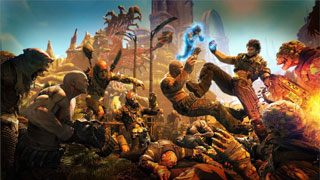 Bulletstorm developer People Can Fly has partnered with Square Enix for a new, unnamed game project.

If you're a fan of Bulletstorm or its developer, People Can Fly, here's some good news for you. The studio is now working on a new game in partnership with Square Enix.

While there's no word on what the game or IP is, or even what genre it might fall into, the press release says that the project is being developed for PC and consoles, and that it will be "high-end." People Can Fly is expanding for this project, listing a number of new positions on its website. The project is still very early in development, and Square Enix has already confirmed that it won't be appearing at E3 this year.

Lee Singleton, head of studio at Square Enix London Studios, said of the project, "We're building a game we all want to play which will be the perfect addition to our portfolio."

People Can Fly created both Painkiller and Bulletstorm before Epic Games acquired a majority stake in the developer in 2007. It then worked on games in the Gears of War series, including the PC port of Gears of War. The studio was fully acquired by Epic in August of 2012, and renamed Epic Games Poland in November of 2013. However, the studio became an independent again in June of 2015, renaming itself People Can Fly once again.

We'll have to wait and see what this new game turns out to be, but if People Can Fly's track record is any indication, it may be worth keeping an eye on.