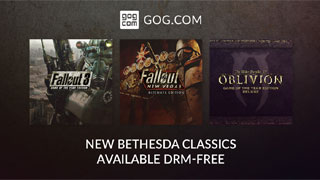 GOG.com has added three classic Bethesda RPGs to its store, and they're all DRM-free, and on sale.

GOG.com is constantly adding new games to its store, but this week's may be of more interest to Bethesda fans. You can new pick up Fallout 3, Fallout: New Vegas and The Elder Scrolls IV: Oblivion completely DRM-free.

This version of Fallout 3 has had Games for Windows Live completely removed, GOG told The Escapist. Although the button is still in the menu, it does nothing. As usual with GOG version of games, all three will support mods.