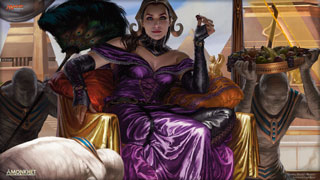 There's a new MMO based on Magic: the Gathering in the works, and it's being developed by Cryptic Studios.

When Magic: the Gathering was first released in 1993, no one knew how successful it would become. The trading cards went from being passed around in high schools to high-dollar collectors items. There's now a worldwide Pro Tour, new sets every year, and mountains of cards to play with. Now there's going to be a Magic: the Gathering MMO, and it's being developed by Cryptic Studios, the same company behind the Dungeons & Dragons MMO, Neverwinter.

Although there are no concrete details at this time, Cryptic Studios CEO Stephen D'Angelo said that, "Everything from the graphics to the gameplay is being targeted for a truly unique AAA game. We're thrilled to provide Magic fans with an opportunity to explore the game's worlds and characters through an entirely new lens. Get ready to embark on a brand new journey."

David Schwartz, Wizards of the Coast Vice President of Digital Publishing, said of the announcement, "This game is an exciting part of Wizards of the Coast's Magic Digital Next initiative to extend gameplay beyond the tabletop, and we're proud to work with the talented team at Perfect World Entertainment and Cryptic Studios to bring the Magic: The Gathering Multiverse to life."

There's no word on what the game will be called, when it will launch, or anything else, really. We'll keep an ear to the ground for more info, but until then, this is what we know.