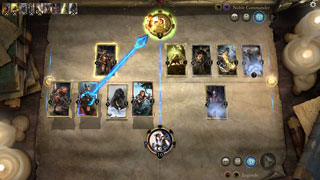 If you like watching or streaming Bethesda games on Twitch, you'll soon be able to earn rewards by doing so.

Bethesda is starting a new program that will give free, in-game rewards to gamers who watch or stream the company's games on Twitch. Called "Twitch Drops," it will allow users to link their Bethesda.net account with their Twitch account to receive free goodies.

The first Twitch Drop event will take place during Bethesda's E3 showcase, which starts on June 12 at 12 AM ET (June 11 at 9 PM PT for you West coasters). While the showcase is going on, Bethesda says it will "be distributing Drops all evening long for The Elder Scrolls: Legends - including card packs and in-game currency."

On Wednesday, June 14, Drops will roll out to all Legends streams on Twitch. Beyond that, the company says that its "vision for Drops is to allow anyone who is streaming or viewing a Bethesda title that is powered by Bethesda.net to earn Drops." More details are promised "in the future" about games that the program will support.

You can find all the info about Twitch Drops over on Bethesda.net, and you can link your Twitch account with your Bethesda.net account while you're there.