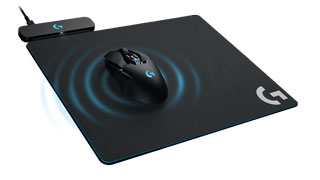 Wireless mice have always been sort of looked over for gaming. For years the excuse was, "They lag too much." But in the last couple of years, we've seen wireless mice that are as fast, or faster, than their wired counterparts. Now Logitech is addressing the charging concern with a new wireless charging system that it had dubbed "Powerplay."

Powerplay is a new system that turns your mouse pad into a wireless charger. While you are using your mouse, the pad will keep it charged between 75 and 90 percent full. While the pad will stop charging at 90 percent, you can still plug in the mouse if you want to charge it to 100 percent.

When the system launches August 20, you'll be able to buy the Powerplay charging base, two mousing surfaces (one soft, one hard), and the Powercore module in a bundle for $99. The two mice that Powerplay will initially be compatible with are the G903 (a Powerplay compatible revamp of the popular G900 mouse) and the G703 (a revamp of the G403). Both mice will come with a 10 gram removable weight in the socket for the Powercore, and the G903 has been updated with new switches rated for 50 million clicks. Both mice will be available later this month, with the G903 priced at $149, and the G703 at $99.

Of course, the G903 and G703 won't require the Powerplay system to function, and they will work on any mouse pad. And since the Powerplay mouse pads are replaceable, you won't have to buy a whole new charging base if you pad wears out.

We'll have to wait until we get our hands on it to be sure, but this new wireless charging pad sounds like it could make wireless mice much more attractive to gamers everywhere.