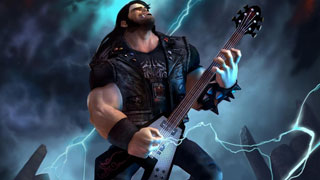 During an E3 interview with Jack Black, Tim Schafer said that Double Fine will make a sequel to Brutal Legend "someday."

Tim Schafer has been in the news of late because he was appearing at E3 to be interviewed by Jack Black. Black had previously worked with Schafer when he provided the voice for Eddie Riggs, the main character in Brutal Legend. As you'd expect there was speculation that this might be the lead up to, or setup for, an announcement of a sequel to the heavy metal-themed game. In fact, when the floor was opened up for questions, someone in the audience yelled out "BRUTAL LEGEND 2!"

At that point, Schafer apologized for the impression that Brutal Legend 2 might be announced, and said that panel was just a public chat between two old friends. But then he went on to offer up at least sliver of hope to those wishing that the sequel would happen.

"Someday we'll make that game," Schafer said. He add that it would be an expensive undertaking, which is not surprising. After all, the original featured many famous musicians, popular rock songs, and more. As the first Brutal Legend had a hefty $25 million price tag, it's not hard to imagine a sequel going well beyond that eight years (or more) later.

Many people were turned off by Brutal Legend's combination of real-time strategy and third-person action. I've had a number of people tell me that the game was great until it got to "those stupid strategy parts." However you felt about it, there's one thing you can't deny - it's outsold every other game Double Fine ever released.