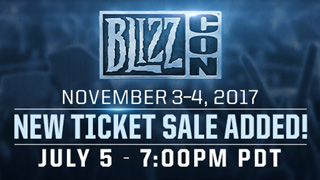 If you missed out on BlizzCon 2017 tickets, you'll have one more chance in early July.

BlizzCon tickets went through two rounds of pre-sales back in April, and as usual, they sold out in moments. If you missed out on those, Blizzard is adding one more chance for you to get tickets to the show.

The announcement came in a post on the BlizzCon site, in which Blizzard says that it is moving the show to a bigger, brand-new hall in the Anaheim Convention Center. Because of that, the company is adding a third round of ticket sales. That set of tickets will go on sale on Wednesday, July 5 at 10 PM ET / 7 PM PT.

Tickets are $199 each, plus taxes and fees. You can find more information on the sale and how it will work over on the BlizzCon Ticket page. If you can't make it in person, Blizzard will soon begin selling Virtual Tickets for this year's show, which allow you to watch the festivities through streaming.

BlizzCon 2017 will be held at the Anaheim Convention Center November 3-4.