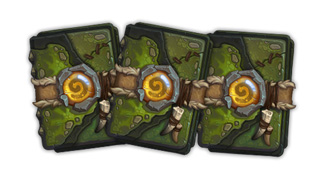 If you're a Hearthstone player, the odds are that you've complained about duplicate cards in packs at least once. Well, Blizzard has heard those complaints, and when the next expansion launches, the company plans to do something about them. The changes were announced in a post on the official Hearthstone blog.

Another new change is that you will be guaranteed to receive at least one Legendary within your first ten packs of a new set. All of these changes will apply to packs from all sets, not just those from the newest expansion.

Finally, Blizzard also announced a new promotion that will be starting "in the next few days." That promotion will offer bonus Journey to Un'Goro card packs in bundles, with the bundle price remaining the same. Here's the offering:

There's no word on what the next expansion might be, or when it might launch. That said, these are some positive changes to card packs that we'll see once it rolls out.