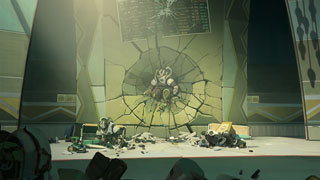 We've been hearing rumblings about Blizzard adding Doomfist to Overwatch for a while, and now he's officially being teased.

If you've followed Overwatch at all, you've probably heard the name Doomfist. Blizzard hinted that there might be a character with that name coming to the game, and the rumors only intensified when actor Terry Crews started tweeting about providing the voice for the character. When the 24th hero turned out to be Orisa, the speculation quieted down, but in April the rumor mill cranked back up when Blizzard said the next hero was already "very far along" in development. Now Blizzard has started teasing Doomfist for real.

In a post on the official Overwatch blog, Doomfist is said to have been broken out of prison by Reaper, after which he went to Numbani to reclaim his gauntlet weapon. If you've noticed that Blizzard added damage to some areas of the Numbani map, this is likely why. The report says that Doomfist is named Akande Ogundimu. If you've followed Overwatch lore, you know that according to posters on the Numbani map, there have already been two characters who went by the name Doomfist, and neither has that name.

Add to this that last week's PTR update was apparently briefly named the "Doomfist/Summer Games" update, and you can see why players are getting the rumor mill going again. The Summer Games update last year launched the first week of August, so if it's happening again this year, we should hear more soon.