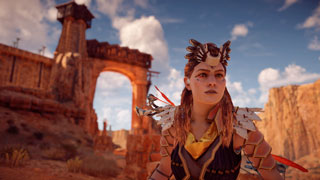 Guerrilla Games may be putting a lot of time into the development of The Frozen Wilds DLC for Horizon Zero Dawn that was announced at E3, but that doesn't mean that it isn't working on other updates for its popular PS4 exclusive. The newest update is today's patch 1.30, and it brings a New Game + option, an ultra hard difficulty mode, bug fixes and more.

The New Game + mode will let you replay Aloy's story without losing your inventory and character progression. The level cap is not changing, so you can't go beyond 50, but you can still gain XP as you play. The mode will also include updated versions of existing versions and outfits that include an additional modification slot. They won't be cheap, but they will let you increase your combat power. New Game + will also add two new trophies and extra unlockable content that will let you add face paint or change Aloy's Focus.

If New Game + isn't challenging you enough, you can also opt for the new "Ultra Hard" difficulty option. Guerrilla says that this setting will "enhance machine senses and behavior and will limit player health regen and other additional smaller tweaks." Once you step up to Ultra Hard, you won't be able switch back to a lower difficulty.

The patch is available now, and also includes fixes to progression issues. You can find the full report from Guerrilla Games over on the PlayStation Blog.