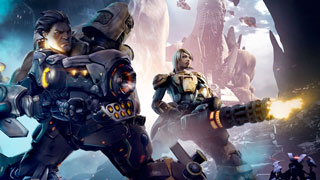 Just in case you wondered what ever happened to Red 5 Studios' MMO shooter Firefall, it's shutting down for good today.

Firefall, the MMO shooter from Red 5 Studios, has had something of a tumultuous life. It began as a PvP-focused game, moved to PvE, and had plenty of drama surrounding it. Red 5 has seen layoffs, acquisitions, and more, but on Wednesday, the company announced that it was closing down the game effective today, July 7.

First announced in 2010, Firefall's mixture of shooter gameplay and MMO mechanics caught the eye of many in its early days, but the game's inconsistent nature and performance issues caused problems, and a move to free-to-play couldn't save it.

According to the closure announcement post, Red 5 is "currently developing a mobile version" of Firefall. It goes on to say that " all of Firefall's founders and players will be rewarded greatly in the new game." So if you're into mobile versions of MMO shooters, you should stay tuned for more news on that.