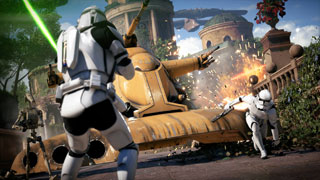 You'll get your chance to check out Star Wars Battlefront 2 before launch when the multiplayer beta kicks off this October.

EA has announced the start dates for the Star Wars Battlefront 2 multiplayer beta, as well as what it will include. It's also given out a bit of extra good news: the beta is is coming to PC, PS4, and Xbox One.

The beta will include a variety of things to experience. You'll get the chance to try out Galactic Assault mode in Naboo: Theed, where you'll fight alongside Republic clone troopers and Separatist battle droids. There's also a multiplayer Starfighter Assault battle for your enjoyment. Although the full details for that won't be revealed until Gamescom next month, EA does say that you'll get to "pilot a variety of the most memorable starfighters from Star Wars."

Although those two things are the only ones mentioned in the official blog post, it does tease the possibility of more, saying, "Keep your eyes open for even more surprises as the beta approaches."

If you've pre-ordered the game by the time October rolls around, you'll get access to the beta two days early on October 4. If you want to wait and see what the game is like before you pre-order, you'll be able to start playing on October 6. The beta will close for all participants on October 9.