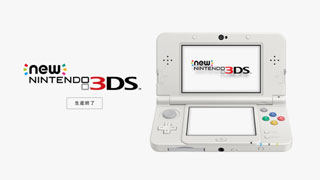 Nintendo is done making the New 3DS in Japan, but the New 3DS XL is still going strong, apparently.

It seems like Nintendo always announces the end of production for its hardware in the most obscure way possible. That's typically with a small note on its Japanese website. That's happened again, as the company has announced that production of the New 3DS has ceased.

Over on the official Nintendo Japan website, the magic of Google translate reveals that the New 3DS lineup is marked as "All production ended." However, there is no such message on the page for the New 3DS XL.

That's not terribly surprising, as that's the current top-end model of the handheld, and the soon-to-be-released New 2DS XL will be filling the lower-priced slot in the handheld lineup.

Of course, there will still be units available in some stores for a while. There's also no word on when or how this will affect units outside Japan. That said, if you've been holding off on picking up a New 3DS, you might want to think about making that purchase before it's too late.