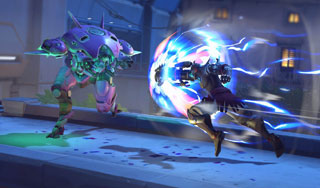 Prep for Doomfist's arrival by learning some of his history in the newest Overwatch comic.

The newest issue of the Overwatch comic series has arrived, and of course it focuses on Doomfist. Titled "Masquerade," it focuses on the time shortly after Doomfist's escape from prison, and his return to Talon.

"Years after suffering defeat at the hands of Overwatch, Akande Ogundimu--better known to the world as Doomfist--has escaped imprisonment and reclaimed his place within Talon's inner council," says Blizzard on its website. "After getting up to speed on recent events, he decides to take matters into his own hands and charts a deadly new course for the shadowy organization."

You can check out the comic over on the Overwatch website.

Doomfist was added to the PTR earlier this month, and is slated to release to everyone next week. If the comic isn't enough for your fix, you can check out all his skins right here.