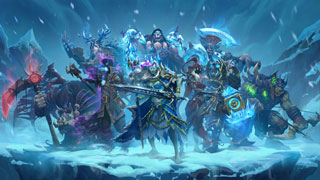 Get a look at the first cards revealed from the new Knights of the Frozen Throne expansion for Hearthstone.

Blizzard announced the next expansion for Hearthstone earlier this month. Titled Knights of the Frozen Throne, the expansion will add 135 new cards, including some legendary cards that will turn your heroes into Death Knights.

The new expansion will also introduce the Lifesteal mechanic. This new addition will heal you for the same amount of damage it deals on a turn. You can also expect to see new Deathrattle effects.

As is usually the case, Blizzard is revealing cards in small batches. So far, we've seen seven of the new cards, and you can see them below. We'll be rounding up the new announcements every few days, so stay tuned for more.

Knights of the Frozen Throne is due to launch sometime in August.