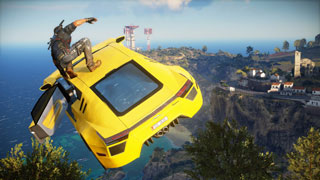 If you haven't played the chaotic Just Cause 3, now's your chance to try it out for free, and buy it on the cheap.

Last week, the new multiplayer mod for Just Cause 3 was released. This week, you can find out if you want in on the action, as the game is free to try out on Steam, but only until tomorrow.

Just Cause 3 is called an action game, but it could just as easily be described as a crazy action movie simulator. You can grapple a helicopter and steal it, fly it into an airplane, bail out, parachute down, and then attach a cow to a car and watch the chaos ensue. Even better, with the multiplayer mod out, you can do all that with a bunch of your friends.

If you try the game and like it, it's on sale for 75 percent off right now, and the deal extends to the game's DLC as well. If you like it so much that you want to play all the games in the series, that package is 83 percent off.

The free trial ends tomorrow, and the discounts expire on July 28, so if you want in, you need to act quickly. You can find the game over on Steam.