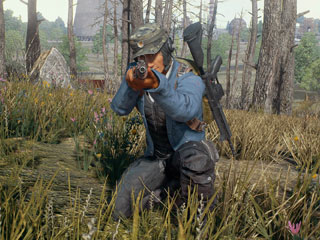 It's only been a couple of weeks since PlayerUnknown's Battlegrounds surpassed GTA 5 on SteamSpy's concurrent players chart. At the time, it was about 100,000 players behind Fallout 4, but that's already changed. According to SteamSpy, 481,291 people were playing together at PUBG's peak, placing it squarely above Fallout 4, and giving it sole possession of third place.

That means that there are only two games with more players: DOTA 2 and Counter-Strike: Global Offensive, both Valve titles. Creator Brendan Greene cheered the news on Twitter, as you'd imagine.

It's also worth noting that SteamSpy's charts show that six million people now own PUBG, a number that continues to grow quickly. There are plans for mod support, new maps, and more before the game's planned full launch out of Early Access, which is planned for late this year.