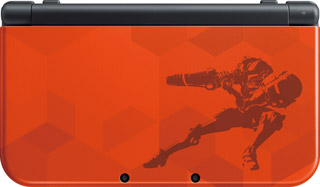 The new system features Samus on the case, but doesn't include a copy of the game.

If you're a big Metroid fan, there's a new 3DS XL on the way that you're going to love. Alongside the release of the upcoming Metroid II reboot, Metroid: Samus Returns, Nintendo is releasing the New 3DS XL Samus Edition.

As you can see in the images below, the case sports an orange and yellow color scheme with a picture of a fully-armored Samus on the front.

If you're interested in playing Metroid: Samus Returns on this one, you'll need to also purchase a copy of the game, as the console doesn't include one. You'll also want to move fast get a pre-order in, because like most custom 3DS consoles that Nintendo releases, this is a limited edition, and once they're gone, you're going to pay a whole lot more on eBay. Luckily, the going rate is $200, just the same as every other New 3DS XL.