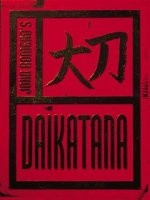 A fan-modified version of Daikatana known as Daikatana Deathmatch has been released, giving gamers the opportunity to leap into the game's high-intensity multiplayer action free of charge.

Originally intended for the creators' personal use, the idea of releasing the game publicly came about when a few other members of the community offered positive feedback after sampling the mod themselves. According to the README file, the Daikatana Deathmatch mod (also known as DKDM) "assumes that the downloader already owns a legitimate full version of the game," even though it's not required in order for the mod to run.

While making a free-to-download version of Daikatana may be of dubious legality, it passes muster with the one member of the community whose opinion may actually matter: John Romero. In a post on Planet Rome.ro, the man himself wrote, "I tried it out and it worked perfectly. There's been some modification of lots of little things and it has a great little launcher included to simplify some options. I connected to a master server and found about 5 of them running and people were DMing so I joined and it was tough to stop!" He then goes one step further and offers up a link to download the file, which is about as close to "express written consent" as one can ask for.

DKDM also includes an additional PAK file that contains skins, textures, sounds and other effects from the original Daikatana "mplayer demo," which can be used to faithfully recreate the 1999 multiplayer Daikatana demo experience.

While Daikatana is infamous for its troubled development cycle and underwhelming performance, the mod creators maintain that the multiplayer portion of the game is worth a look. In the mod's release notes, they write, "One of the aims in realeasing DKDM is to get Daikatana's multiplayer out there to people who were turned off first time around and missed out on the speed and action of Daikatana multiplayer. Even in single player - it isn't all just frogs, guys."

Along with the Planet Rome.ro link, download mirrors are also available at Gamershell and DaikatanaNews.net.