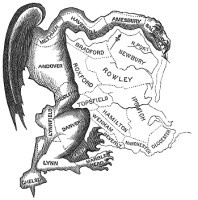 The Game Innovation Lab at the University of Southern California has created an online game that explores how redistricting can change the political landscape in the United States and essentially disenfranchise voters.

The Redistricting Game is designed to educate, engage and empower citizens around the issue of political redistricting, according to the game's official website. Redistricting, also known as gerrymandering, involves manipulating electoral district boundaries in order to gain an advantage over political opponents in an election. The term originated in the early 1800s, and while it can be employed for various reasons and effects, the end result remains the same: a reduction (or increase) in the effective power of an individual vote.

Recent events in the U.S., including a 2006 Supreme Court decision that allows politicians throughout the country to redraw and gerrymander districts as often as they like in order to protect their seats and political parties, have drawn renewed attention to the practice. Some individual states are taking steps to place redistricting authority in the hands of neutral commissions in order to reduce abuses. Rep. John Tanner of Tennessee, who recently showed the Redistricting Game to other members of Congress, has drafted a bill which would require redistricting to be handled by bi-partisan commissions rather than state legislatures.

Along with the game itself, the Redistricting Game website offers education and insight into the practice and its impact on the political process, as well as links to other sites and information about individual U.S. states and their representatives.

"The game provides a basic introduction to the redistricting system," the website says, "allows players to explore the ways in which abuses can undermine the system, and provides info about reform initiatives - including a playable version of the Tanner Reform bill to demonstrate the ways that the system might be made more consistent with tenets of good governance."