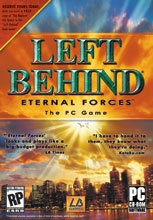 The U.S. Department of Defense has canceled plans to send copies of the videogame Left Behind: Eternal Forces to American troops stationed in Iraq.

The cancellation followed an ABC News inquiry into the plan. The games were meant to be included with care packages provided to the troops by the evangelical group Operation Start Up, which "actively" preaches and seeks converts to Christianity among soldiers. The plan to send the game was first uncovered by the Military Religious Freedom Foundation, which issued a statement supporting the decision to "cease this provocative act." However, the Foundation's president, Mikey Weinstein, added, "I doubt this will prevent unconstitutional activity in the Pentagon with regards to freedom of religion for more than just a few days."

Operation Start Up President Johnathan Spinks drew criticism recently for his comments on the program when he wrote on the organization's website, "We feel the forces of heaven have encouraged us to perform multiple crusades that will sweep through this war-torn region. We'll hold the only religious crusade of its size in the dangerous land of Iraq."

The plan to include the game came under fire from multiple sources almost as soon as it was uncovered. Critics claimed it violated constitutional provisions regarding religion and was unnecessarily and overtly provocative. Based on the Left Behind series of books, Left Behind: Eternal Forces is a real-time strategy game in which the Christian Tribulation Force engages the army of the Antichrist, known as the Global Community Peacekeepers. The game was released to generally poor reviews, receiving an aggregate score of 45 percent on GameRankings and 49/100 on MobyGames.