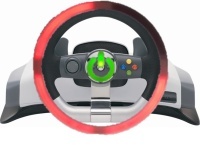 Microsoft has announced that it will be providing a free retrofit to owners of its Xbox 360 Wireless Racing Wheel.

The move comes in response to what Microsoft called "a very small number of incidents" in which the wheel began to overheat and produce smoke when the included AC/DC transformer was used to power the device. Microsoft has said the wheel is perfectly safe to use with batteries, but has advised customers to stop using the external power supply. Thus far, there have been no reports of injury or property damage as a result of the hardware failure.

The overheating problem is the latest in the Microsoft's Xbox quality control woes, following an estimated $1 billion cost to address the notorious "red ring of death" repairs, as well as a less-publicized issue involving damaged game disks that most commonly occurs when the console is moved with a disk in the drive.

More details and a link to register for the retrofit program are available at http://www.xbox.com/support, or via telephone at (800) 469-9269.