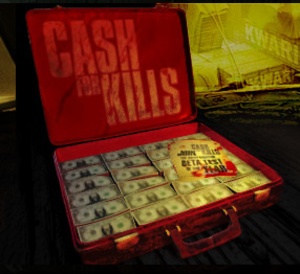 Shoot your friends, earn glorious cash prizes! Shoot them, in a videogame that is.

The alchemical wonderchild of high-stakes competition, massively multiplayer price models and first-person shooters has been born in the U.K., and its name is Kwari. Kwari, also the name of the game's developer, explained the concept in a press release:

Kwari's game of the same name is a first-person shooter (FPS) with a difference; players make money off each other in real-time. The game will ultimately be free to download online, but instead of being subscription-based it will use a unique free-to-play/pay-to-play model whereby Kwari sells the player ammunition in place of flat rate charges or monthly subscriptions.

The press release also states there will be different stake games. For example, in one game, every time you're hit, a deduction of $0.01 will be taken from your account. In another game, you might lose a dollar per hit. Thus, "the player's money stake mirrors their in-game health, except it's exchanged from one player to another."

No word yet on how the designers will respond to the almost-certain barrage of cheats and hacks that invariably make their way onto online FPS games (see Counter-Strike, PlanetSide, etc.). Allegations of cheating could certainly be aggravated if real-life cash is on the line.

Whether Kwari will redefine the way online games are played or end up another blip on the increasingly blurry radar screen of online gaming remains to be seen, but the money factor could add enough novelty (not to mention potential rewards) to give it a consistent audience. Who knows, maybe even Thresh will come out of retirement for this one.