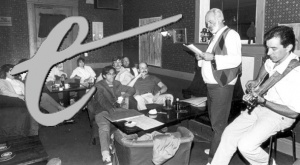 There's no need to be dissuaded by the fact we're already a week or so into September, it's Game Circle time!

The game for September is Deus Ex, the FPS with RPG undertones that made everyone all gaga back in 2000 with it's cyberpunk-inspired, deep story, action fueled, hard to categorize awesomeness designed by Warren Spector's Ion Storm Austin studio.

Check out Warren Spector's series on storytelling in games, his other series of articles for us and this completely tangential story about how I had lunch with him last year in Austin.

Deus Ex puts you in the shiny, black boots of a hero named J.C. Denton (Know anyone else with the initials JC?) and the cultural references (oblique and otherwise) barrel on from there. Even the title, referring to the deus ex machina of greek tragedy, is so pseudo-intellectually wanktastic, we had to make this our game of the month.

Deus Ex is game is available for Windows, Mac and PS2, and can be found practically everywhere games are sold. But don't get confused by that other Deus Ex game, Invisible War, which even Warren can't stand.

It's pretty simple. Once a month we'll pick a new game, and suggest you pick up or rent a copy. Then we'll play it. Then we'll talk about it. It's really that simple.

What do I need to do?

Keep an eye out for posts like these. They will usually occur near the beginning of a month (in this case, September). Then, if the game and the concept interest you, find a copy of the game of the month and play it.

How do we discuss?

By checking the forum thread frequently, adding a thought when one occurs to you and commenting on messages left by others. It's simple.

Nothing is unimportant. If your first impression is the graphic look like ass but the dialogue is neat, say that. You'd be surprised how easy it is to start a discussion.

Do I have to finish the game?

Ideally, but it's not technically necessary I suppose.

Do I have to finish the game to start talking about it?

Absolutely not. That's part of the fun of sharing the experience, sharing our impressions as we go.

Naturally some folks will have more time than others, and will play faster as a result. That's OK. Let's try to be aware of not posting plot or puzzle spoilers if we can help it.

We'll set a deadline toward the end of each month after which it's OK to talk about the full plot and whatnot. If you can't help but talk about every detail, or don't want to know anything about the game until you discover it yourself, then it might be a good idea to avoid the thread until the last week of the month. But I think we can promise to be good and avoid trouble here.