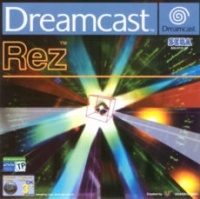 Tokyo developer Q Entertainment has announced that it will be bringing an updated version of the Dreamcast cult hit Rez to the Xbox Live Arcade in the first quarter of 2008, tentatively entitled Rez HD.

Speaking at Microsoft's pre-Tokyo Game Show event, Q Entertainment CCO Tetsuya Mizuguchi said, "We are excited to announce that Rez will be given a new life, this time in digital form. The game will be presented in hi-definition and will be accessible to those who did not have a chance to experience Rez this first time around." Mizuguchi was formerly president of United Game Artists, the Sega division responsible for the original Rez.

"Personally, Rez has been and will always be a lifelong concept," he added. "I hope to take what I learned from the experience of creating the original game and look forward to taking it to a whole new level in the future."

Originally released in 2001 for the Dreamcast and PlayStation 2, Rez received critical acclaim but little commercial success in North America due to its unorthodox gameplay. Instead of using traditional sound effects, Rez employed background trance music that changed as the game progressed, and much of the game's marketing focused on its synesthesiac qualities.