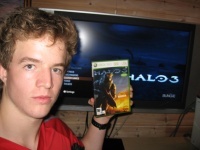 MaxConsole has received a report of the Halo 3 street date being broken by a Norwegian retailer.

The site has received photos of a customer at a store called Expert, holding a copy of Halo 3 in front of an in-store display. According to the email, at least two copies of the game have been sold so far. While most premature sales of games occur only a day or two before the official release date, the Halo 3 break came well over a week prior to the planned release, which is scheduled for September 25.

While this is the only reported incident thus far of the game being sold, there has been concern expressed about competitors following suit, and some gamers are calling for the current street date to be scrapped in favor of an immediate release. Microsoft has not yet commented on the report.

This is the second recent high-profile Xbox 360 release to land in the hands of a few lucky consumers prior to its official release date: A small number of the hit FPS BioShock were mistakenly sold out of several Toys 'R' Us outlets before 2K Games stepped in.