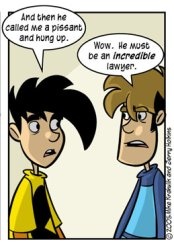 Jack Thompson has threatened Take-Two Games over a mission in Grand Theft Auto IV in which the player must kill a lawyer who, according to Thompson, is him.

According to a letter sent to Take-Two's Strauss Zelnick and Ben Feder, as well as numerous other individuals and media outlets, Thompson saw a reference in the September 2007 issue of Game Informer in which the offending mission was described. The player must kill a lawyer who, after meeting the player, says, "Guns don't kill people. Videogames do."

In his letter, Thompson says, "This faux quotation, which I have never uttered is nevertheless attributed to me at countless Internet sites obtained by googling the above quotation of the lawyer killed in GTA IV. The fact that the lawyer, kill [sic] on Niko's first mission, would bring up videogames, makes it more clearly a reference to me. Game informer finds the non sequitur reference to videogames by the assassinated lawyer a "hilarious response."

Thompson claims this is not the first time Take-Two has "targeted" him, referencing the site at www.citizensunitednegatingtechnology.org which arose as a result of his efforts against Grand Theft Auto: Liberty City Stories, but Thompson claims surprise that Zelnick would "sink this low" in its efforts to discredit him. "Now you have descended this low," Thompson wrote, "using one of your games to threaten my physical safety."

"You have until five o'clock p.m. this Friday, September 21, 2007, to inform me via e-mail that you are going to delete the above references and any other references that could reasonably be construed to be references to me in Grand Theft Auto IV and any other videogames that are pending release," he wrote.

"Govern yourselves accordingly, or else."