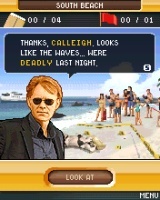 Mobile gaming company Gameloft has joined with CBS to develop and publish a series of games based on the hit CSI television franchise.

The first game in the series will be based on CSI: Miami, and will launch in the U.S. today to coordinate with the premiere of the show's sixth season. Developed by Gameloft and CBS Mobile, the games will include significant involvement from the show's creative team, including CSI: Crime Scene Investigation creator and executive producer Anthony Zuiker.

"A mobile game adaptation of a CSI series is the perfect complement for a franchise with a fan base that watches the show with such a high level of engagement and interest in interactivity," Zuiker said. "We are thrilled to join forces with Gameloft and are confident in their expertise to capture the essence of CSI and translate it into a quality mobile game."

Gameloft Vice President Gonzague de Vallois was also "thrilled" by the announcement, and added, "The CSI franchise set the bar for primetime crime drama television by engaging viewers on all levels. The mobile games will expand the CSI storyline into a fun and interactive experience."

The new CSI: Miami mobile game will put players in the role of lead investigator, collecting evidence and interrogating suspects. The game will be available through most U.S. carriers, including AT&T, T-mobile, Sprint and Verizon, and is expected to be rolled out to 75 countries over the coming months.

Decade of the Nerd MovieBob 87 Comments
Comments on