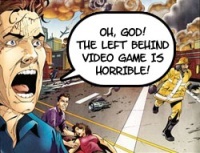 Left Behind Games, producer of the biblically-apocalyptic Left Behind: Eternal Forces, has issued threatening letters to blogs and websites that have criticized the company's real-time strategy game.

According to a report on GamePolitics, sites including Gameology, Daily Kos and the Public Theologian have received the letter, which insists the sites remove "false and misleading" comments or face legal repercussions. Daily Kos claims that at least one blogger has removed Eternal Forces-related content in order to dodge the threat, but many others have chosen instead to make the intimidation tactic public.

The letter, issued by the law offices of Gordon D. Katz, says that while Left Behind Games "generally supports free speech in the media," it will not tolerate the spread of false information that may cause harm to the company. "Left Behind Games Inc. is demanding that you immediately remove any and all information contained on your site about the above stated game that is false and/or misleading, including any such statements or commentary and the responses thereto," the letter says. "This includes posted comments made by others in the context of reading the incorrect or misleading statements."

"If you do not comply immediately, the company will be forced to pursue additional legal action which will include claims for damages, costs of suit and attorney's fees," it continues. "This may subject you and your organization to significant legal and financial damages."

Oddly, the letter does not specify what "false and misleading" information the company wishes removed. It does, however, invite recipients of the letter to call the lawyer's Administrator, Robilyn Lyndon, executive vice-president of Left Behind Games and wife of Left Behind Games CEO Troy Lyndon, which also makes her the client.

Released in 2006, Left Behind: Eternal Forces has faced criticism both from Christian groups, who decried the game's intolerance and "convert or die" philosophy, and from game reviewers, the majority of whom slapped the game with average-to-poor reviews over its technical issues (most of which have since been patched) and mediocre gameplay.