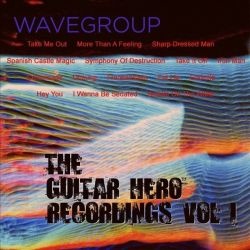 WaveGroup, the team behind the recordings in Guitar Hero, Guitar Hero II and Guitar Hero Encore: Rocks the 80s have announced the upcoming digital release of the The Guitar Hero Recordings.

The music will be split into seven separate volumes, and will be available via AOL, iTunes, Napster, Rhapsody and Yahoo!. The collection will feature 97 songs in its entirety.

"It was a blast recording these great rock tunes and we wanted to make the Guitar Hero versions available to everyone," said WaveGroup President and CEO Will Littlejohn, who served as lead music producer on the three Guitar Hero titles. "In addition to experiencing these tracks when playing the games, we're excited that fans can now load up the in-game renditions on their iPods."

WaveGroup, which specializes in the production of audio content for multimedia products, has worked with numerous other clients in the past including Disney, TBS, NASA and Apple. Prior to their efforts on Guitar Hero, the company handled production and mixing duties for Harmonix Music Systems' Karaoke Revolution series of games. Their Guitar Hero and Guitar Hero II tracks have won numerous industry awards, including Best Soundtrack from the Spike TV Video Game Awards, Outstanding Achievement in Soundtrack from the Academy of Interactive Arts and Sciences, and Best Soundtrack at the BAFTA Games Awards.

The full seven volume track list is available here. The Guitar Hero Recordings will be released to the public on October 23.

Gallery of the Day: 8 Good Reasons To Dust Off Your PS2 DrStrangelove 13 Comments
Comments on