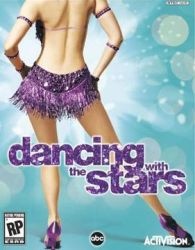 Good news for gamers who just can't get enough of quality cultural television programming: Activision has joined with ABC Entertainment and BBC Worldwide America to bring Dancing with the Stars to game consoles.

Packed with A-list superstars like Emmitt Smith and Stacy Keibler, Dancing with the Stars will use either the Wii Remote and Nunchuk or the PlayStation 2 dance pad to mimic the elegant dance floor moves of the intellectually-bracing, smash-hit television show, while also allowing the player to add his own personal flair to the routine.

Airing at 8:00 p.m. EST Mondays and 9:00 p.m. EST Tuesday on ABC, the televised Dancing with the Stars is hosted by Tom Bergeron, a widely-respected figure in both broadcasting and intellectual circles for his work on America's Funniest Home Videos. Filling in on co-host duties is season two champion and enduring entertainment icon Drew Lachey.