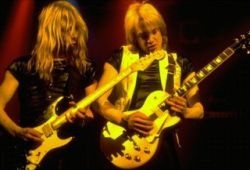 Target has announced it will be offering a special twin-axe version of Guitar Hero III: Legends of Rock for the PlayStation 2 when the game ships on October 28.

Hardcore rockmeisters looking to emulate a Dave Murray-Adrian Smith heavy metal onslaught will be able to leap straight into head-to-head thrashing action with the package. Along with Guitar Hero III itself, Target's bundle will also include two specially-designed wired game controllers as well as a customization pack that includes two guitar straps and two sticker sheets. The bundle will retail for $109.99. No word on whether Target will be offering a similar bundle for other versions of the game.

And for gamers who can't wait to start banging their head against the nearest solid surface, "The Devil Went Down to Georgia," the final track of Guitar Hero III, is available for a listen on MP3Tube.net. Composed and produced by industry veteran Steve Ouimette, the song is a high-speed leather-and-spikes remake of the Charlie Daniels Band classic that'll have you throwing the horns in no time.

Guitar Hero III: Legends of Rock is scheduled for release on October 28 - coincidentally or not, also Charlie Daniels birthday - for the PlayStation 2, PlayStation 3, Xbox 360, Nintendo Wii, PC and Mac.