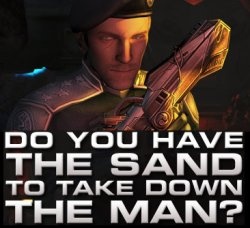 The Tabula Rasa beta test will be wrapping up with a bang this Friday, offering gamers a chance to finish the job with the "Kill General British Contest."

Taking place this Friday, October 26, between 10:00 p.m. and midnight Central Time, the contest challenges players to take on members of the Tabula Rasa team in the game, including General British himself, better known as Tabula Rasa creator Richard Garriott - who may be even better known as Lord British of Ultima fame.

This would not be the first time British has met his end during a beta test: During the Ultima Online beta in 1997, a player was able to kill Lord British during an in-game "royal visit," an act which remains one of the most famous moments in MMOG history. In that case, the killing was unsanctioned, and the perpetrator was banned shortly thereafter.

The contest also promises "other surprises" during the last week of the beta test. Beta keys are available at FilePlanet.