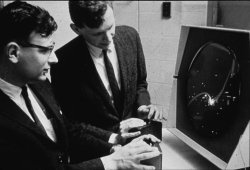 The Federal Reserve Bank of Boston's Economic Adventure Gallery is giving people a look at the roots of the videogame industry with an exhibition entitled "Video Games Evolve: A Brief History from Spacewar! to MMORPGs."

The free exhibit will give users a look at the first non-commercial videogame, Spacewar!, released in 1962, as well the Magnavox Odyssey, the world's first videogame console, and an enlarged reproduction of Odyssey designer Ralph Baer's prototype notes. Great arcade stand-ups including Donkey Kong, Ms. Pac Man, Frogger and Space Invaders will also be available for free play.

Continuing from the earliest days of videogames, the evolution of home consoles will also be covered, along with an in-depth look at the motion-capture process, which will feature several 3-D sculptures on loan from The Guildhall at Southern Methodist University that were used to develop in-game animations. Contemporary MMOGs such as Star Wars Galaxies, Second Life and World of Warcraft will also be part of the exhibition.

"This is a wonderful exhibit not only for videogame lovers, but for anyone who wants to know how science, technology and art come together to form an industry," said Dr. Peter Raad, Executive Director at The Guildhall at SMU.

The Federal Reserve Bank of Boston's Economic Adventure is designed to "teach middle and high-school students how New England's improved living standards are reliant upon innovation, which leads to advances in productivity." The exhibit runs from 1:00 - 4:00 p.m., Monday to Friday.

Which Next Gen Console is Right For You? MyLifeIsAnRPG 35 Comments

Jimquisition: Why PC Gaming Gets Away With It Jimothy Sterling 295 Comments