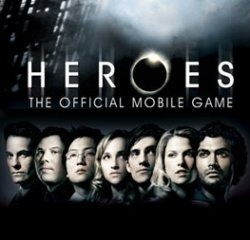 Mobile developer Gameloft has announced the release of Heroes: The Official Mobile Game, based on the hit NBC television series, that could give gamers a unique preview into events in the second season.

Players take on the role of Hiro, Niki or Peter as they move through highlight moments of the show's first season, while other characters from the series will also make appearances as the game progresses. The game was written in conjunction with the show's writers, and offers 11 levels of action taking place over four locations.

"With such a massive fan base, we knew it was critical to work closely with the writers and producers of the television series to develop a game that matched the dynamic atmosphere," said Gonzague de Vallois, Gameloft's senior vice president of publishing. "Surpassing expectations is what we aimed for and achieved with the game, so we are very happy with the end result and look forward to fans enjoying it worldwide."

"We are always looking for organic ways to extend the Heroes story in the transmedia landscape," added Heroes creator Tim Kring. "The Gameloft project afford us a perfect opportunity to begin revealing an important season two story point before it actually hits the television screen."

The season two spoiler is located in a hidden room that holds a secret about "a long-standing show mystery" that won't be revealed to the television audience until later in the season. Heroes: The Official Mobile Game is available now over most U.S. cellular networks.