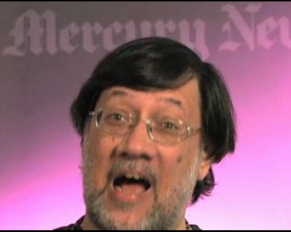 With Manhunt 2's release generating a frenzy of attention from politicians and watchdog groups, San Jose Mercury News game correspondent Mike Antonucci has turned both barrels on the naysayers.

"Enough with the watchdog people," Antonucci declares at the beginning of his recent post, going on to lambast groups like Common Sense Media who, "haven't done much for their credibility in their super-extreme reaction to Manhunt 2."

He's concerned that Common Sense Media in particular isn't encouraging parents to do their research on the game, which is their normal procedure when it comes to adult-themed games, but instead simply calls for an unequivocal boycott of the title for everyone under 17. CSM wrote in a press release, "Common Sense wants to make sure that parents know this game is NOT okay for kids," specifically stating that they sought to foment a boycott of the game. Antonucci, whose Mercury-sponsored blog has been an occasional proponent of CSM in the past, gave no ground on this issue.

"Lecturing parents about what they should do is, well, offensive," he writes. "If they wanted to emphasize that parents should evaluate the game, they could have done exactly that. Instead, they've portrayed Manhunt 2 as unacceptable under any circumstances for all children."

"Parents, make your own choice," he writes.