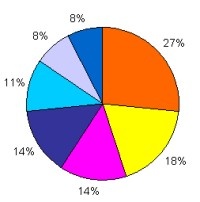 A new poll by the Associated Press and AOL Games shows that 43 percent of parents with kids who play videogames don't play the games with them.

Further, among those parents who do report sharing videogames with their kids, 30 percent say they only do so for less than one hour per week. 81 percent of parents said their children, between the ages of 4 and 17, played computer or console games regularly, but only 38 percent of the adults surveyed admitted to doing so themselves. Parents who do regularly game with their children are more likely to be younger and single and have only part-time jobs, the survey found.

The differences between adult gamers varied very slightly over race or religion, but very much so by age: Twice as many respondents between the ages of 18-28 reported game-playing activity than among those aged 50 to 64. 44 percent of reported gamers play on the internet, and 46 percent reported spending up to $200 on games within the last year. Unsurprisingly, men were more prone to spending more money on videogames than women.

The poll, which involved 2016 adults, found the numbers of adults who played videogames has remained almost constant since the last poll was taken, in April 2006.

Who's Your Daddy? Erin Hoffman 2 Comments