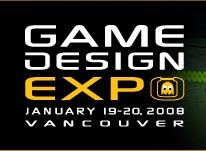 Two high-profile speakers have been named to deliver the keynote address at this year's Game Design Expo in Vancouver, British Columbia.

Jay Weinland and C.J. Cowan, team leads on Bungie's recent smash hit Halo 3, have been announced as the headliners at the 2008 event. Weinland, the audio lead, and Cowan, the cinematic director, will talk about the tools and processes they used to help create the game that became the fastest-selling release in videogame history, smashing numerous other records along the way.

Other lectures and panels at the event will feature members of companies including BioWare, Activision, Eidos, Electronic Arts and Stormfront Studios. The Game Design Program at the Vancouver Film School, which is hosting the event, will also hold a free open house on January 20 which will feature workshops and hands-on demos.