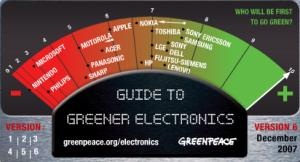 Nintendo has set a new record by becoming the first company on Greenpeace's quarterly Guide to Greener Electronics to score an absolute zero.

Unfortunately for the company, this isn't golf and the zero score represents an unprecedented level of poor performance. The Greener Electronics Guide ranks companies on two criteria: The amount of toxic chemicals and substances used by companies in the production of their productions, and "takeback" and recycling policies of companies once their products become obsolete. The most recent edition of the Guide marks the first time television and console manufacturers have been included in the rankings, which rated the companies on a scale of 0-10.

"Nintendo joins the Guide in bottom place," the Guide's ranking said. "The company scores zero on all criteria, allowing infinite room for future improvement." Greenpeace claims the company has no policies in place regarding banned or restricted chemicals management, timelines for PVC and BFR phaseout, voluntary takeback programs and many other areas of environmental concern.

Microsoft did little better in the rankings, placing third from the bottom in its debut on list with a score of 2.7/10. "Microsoft comes in at number 16 (out of 18). The company scores points for its chemical management and for setting a timeline by which it intends to eliminate vinyl plastic (PVC) and all BFRs, but only by 2011," according to Greenpeace. "Microsoft scores poorly on most waste criteria, but is reporting on amounts of e-waste recycled, albeit only for Europe."

Sony, the third combatant in the console wars, fared considerably better, placing near the top of the list with a score of 7.3/10. The Guide reports, "The company receives a good score for providing many examples of products that are free from PVC plastic, including models of the VAIO notebook, Walkman, camcorders and digital cameras. Sony has commitments to phase out PVC and BFRs by 2010. Sony's takeback and recycling program has good coverage, particularly in the U.S., and the company provides clear information to its customers about what to do with discarded products." However, Sony's ranking is an aggregate of all its hardware products, and its PlayStation consoles are not actually mentioned in the Guide.

Greenpeace's Guide to Greener Electronics, released quarterly, was first published in August of 2006 and includes the top 18 manufacturers of personal computers, mobile phones, televisions and game consoles. The full Guide as well as a complete breakdown of ranking criteria and other information is available at www.greenpeace.org.