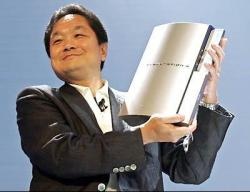 Kutaragi was chosen for the award for his leading role in the creation of the revolutionary PlayStation gaming console, which was released in 1994. Although competing against two more established gaming companies, Nintendo and Sega, the PlayStation quickly became the top gaming console of the era, while Sony's 2000 follow-up, the PlayStation 2, pushed the company dominance of the market even further. The two consoles have combined to ship more than 230 million units worldwide.

"Ken Kutaragi's passion, innovative thinking and business savvy sparked a monumental movement that was unstoppable," said AIAS President Joseph Olin. "If it wasn't for Ken and his concept of the original PlayStation, there wouldn't be the billion dollar industry there is today. His contributions have clearly set new standards for developers, publishers and consumers worldwide."

The 2008 Interactive Achievement Awards will take place on February 7 at the Red Rock Hotel and Casino, in conjunction with the annual D.I.C.E. Summit. More information is available at the D.I.C.E. Summit 2008 website and the AIAS website.